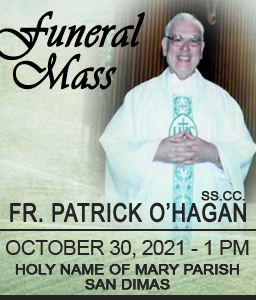 People who have come to know the joy of God do not deny the darkness, but they choose not to live in it. They claim the bright light that shines in the darkness can be trusted. For 82 years Fr. Patrick Joseph O’Hagan, ss.cc., a member of the Congregation of the Sacred Hearts of Jesus and Mary, grew in that trust. On September 21, 2021 His trust was rewarded as he entered eternal life, dying peacefully at the Damien Residence in La Verne, California.

Fr. Pat was born in Ireland on May 18, 1939 in Cashel, County Tyrone, Ireland, to Patrick and Brigid O’Hagan. He had two brothers who preceded him in death, Michael and Dominick. He entered the Sacred Hearts Novitiate in 1958 in Cootehill, Ireland and took first vows on September 14, 1959. In 1959 he began his study of Philosophy and Theology at Queen of Peace Seminary, Jaffrey, New Hampshire. On June 13, 1965 he was ordained to the priesthood at Sacred Hearts Seminary, Cootehill, Co. Calvan, Ireland.

Fr. Pat holds a Master of Counseling and Guidance degree from Loyola University and a Doctor of Ministry degree from the Theological Foundation in Indiana. He served on the faculty of Bishop Amat High School (1965-1970) and Bishop Alemany High School (1970-1971) From 1971 to 2002 he served as a military chaplain with the Veterans Administration hospital system and the Army
Reserves. He entered as a Lieutenant and retired as a full Colonel. In 1983 he served as Director of the House of Formation in Berkeley and Vocation Director. From 2002-2011 he served as Pastor of St. Paul the Apostle Parish in Chino Hills. He was remarkable in acknowledging the gifts of the parishioners and using them to enable an already dynamic parish to grow deeply in faith and love. He was commended for the stable and ever-present pastoral leadership style by which he is being a true shepherd for this parish community. He was highly affirmed for the faithful
diocesan leadership he exercised as Vicar Forane of the West End Vicariate of the Diocese of San Bernardino. Because of his leadership the community of St. Paul was a role model for parish life. From 2011-2015 Fr. Pat served as Pastor of Holy Spirit Parish in Hemet, California where he brought his gifts and continued to call forth the gifts of the people he grew to love.

Since 2015 he resided in Santa Clarita where he continued to make himself available for weekend work in the local parishes. He created a small community of friends with whom he shared his life. Pat was always approachable, with a smile and a helping hand His positive, warm and faith filled personality made him an effective, and valued brother, priest, teacher, chaplain and a good friend to so many. He was very skilled at reading people and the issues at hand. Thus, his advice was valued and always helpful. He was easy going, comfortable in his own skin and affirming of others, their views and their work.

As a member of the Congregation Sacred Hearts of Jesus and Mary, he lived our charism of hospitality and selfless love which he manifested so well in his various ministries, particularly in hospital work. Both as vocation director and later as director of the Berkeley House of Formation he sought out and supported vocations to the congregation and the priesthood. He was community minded and a joy to live with. Even his beloved dog, Rascal, expressed that joie de vivre and filled his days with fun. His life and many ministries were good expressions of what Pope
Francis calls “Joy of the Gospel”. Fr. Pat will be interred at the community plot in San Fernando Mission Cemetery, Mission Hills, CA

May your spirit feel the surge of true delight
When the veil of the visible is raised,
and you glimpse again the living faces
of departed family and friends
May there be some beautiful surprise
Waiting for you inside death,
Something you never knew or felt,
Which with one simple touch,
Absolves you of all loneliness and loss,
As you quicken within the embrace
For which your soul was eternally made.
May your heart be speechless at the sight
of the truth of all belief had hoped,
Your heart breathless in the light and lightness
Where each and everything is at last its true self